Today, I am celebrating my blog’s fourth Anniversary…

Before going on any further, I would like to thank all of you who are following my “Drops of Everything”, who commented and liked my posts. All this testimony is for me a precious encouragement.

Heartfelt thanks to each of you!

Today, I would like to share with you the intimate world of one of America’s best-loved poets, Emily Dickinson… Emily (1830-1886) was a private poet, only a few dozen of her poems were published during her life time out of the nearly 1800 she wrote. The World around her inspired her, she wrote about love, nature, death, immortality…

Emily Dickinson was born in Amherst (Massachusetts) at the family’s Homestead, where she spent most of her life. 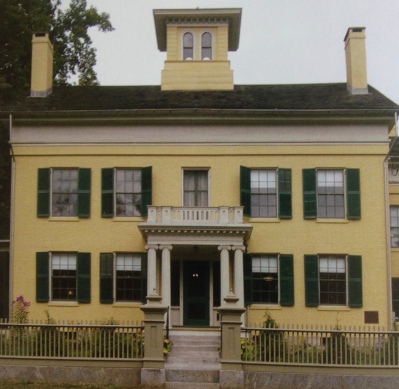 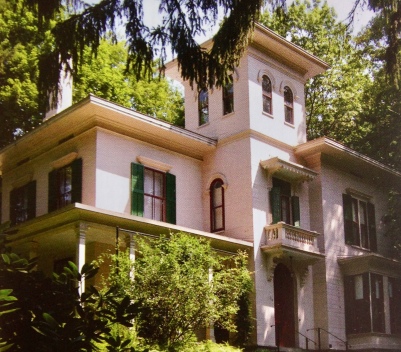 Talking about the Evergreens, her brother’s house, Emily said “a path just wide enough for two who love” linked the two homes and the lives of the Dickinson family members.

After studying Latin, English, classical literature, history, botany at the Amherst Academy for seven years in her youth, she briefly attended the Mount Holyoke Female Seminary where she, in fact, made no lasting friendships. She showed much rebellion against the evangelical fervor present at the school and she disliked the discipline-minded teachers.  She finally returned to her family’s house, occupying her time with household activities, baking and sometimes attending local activities.

In fact she lead a reclusive life, devoted to writing and she even requested her Father’s permission to get out of bed at night to be able to write. Socializing for her was only through correspondence, she was considered as eccentric… People describe her poems as lyrical and unique.  It is said that she may have grown wild flowers for medicinal purposes and used them to show her mood in her poems. 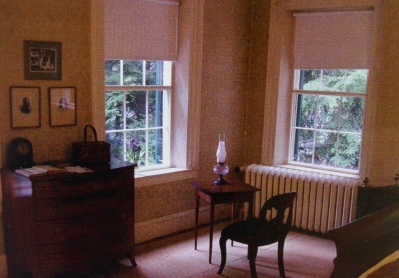 “A little Madness in the Spring is wholesome even for the King.”

In early 1850, Emily wrote that “Amherst is alive with fun this winter … Oh, a very great town this is!”.   Several deaths in her family and neighborhood turned her spirit to melancholy, specially when Amherst Principal, Leonard Humphrey, died suddenly at age 25… It took two years after his death, for Emily to reveal to one of her friend the extent of her depression.

“…some of my friends are gone, and some of my friends are sleeping – sleeping the churchyard sleep – the hour of evening is sad – it was once my study hour – my master has gone to rest, and the open leaf of the book, and the scholar at school alone, make the tears come, and I cannot brush them away; I would not if I could, for they are the only tribute I can pay the departed Humphrey…”

Emily’s strongest and most affectionate relationship was with her sister-in-law, Susan Gilbert.  Emily wrote over three hundred letters to Susan, who was supportive of the poet, acting as “most beloved friend, influence, muse, and adviser”. Susan played a primary role in Emily’s creative processes.

Until 1855, the Dickinson had not strayed far from Amherst. During that Spring, accompanied by her mother and sister, she took one of her longest and farthest trips away from home, first, Washington, where her father was representing  Massachusetts  in Congress, then Philadelphia to visit family. In “Philly”, she met Charles Wadsworth, a Minister of the Arch Street Presbyterian Church, with whom she forged a strong friendship which lasted until his death in 1882.  Despite seeing him only twice after 1855 due to the fact that Charles moved to San Francisco, she variously referred to him as “my Philadelphia”, “my Clergyman”, “my dearest earthly friend” and “my Shepherd from ‘Little Girl’hood”…

Shortly after their trip, Emily’s mother became bedridden and her health continued to decline until her death in 1882.  The poet’s domestic responsibilities weighed more heavily upon her and she confined herself within the Homestead.

In the late 1850s, the Dickinsons met Samuel Bowles, owner and editor-in-chief of the “Springfield Republican”. Samuel and his wife, visited the Dickinsons regularly for years to come. During this time Emily sent him several letters and poems, a few of them were published by Bowles in his journal. It was during that period (1858 to 1861) that Emily Dickinson is believed to have written a trio of letters that have been called “The Master Letters”. They were drafted to an unknown man simply referred to as “Master”, which, even nowadays, continue to be the subject of speculation…

The first half of the 1860s, showed that Emily had largely withdrawn from social life, and is considered as being her most productive writing period. She had many health issues, she was diagnosed as having “nervous prostration” and as at today, some people believe she may have suffered from agoraphobia and epilepsy…

While in Boston, in June 1874, her father, Edward Dickinson suffered a stroke and died. When the simple funeral was held in the Homestead’s entrance hall, Emily stayed in her room. Neither did she attend the memorial service.  A year later, Emily’s mother also suffered a stroke, which produced a partial lateral paralysis  and lost of memory.

Round 1872/1873, Otis Phillips Lord, an elderly judge on the Massachusetts Supreme Judicial Court from Salem became an acquaintance of Dickinson’s. After the death of his wife in 1877, his friendship with Emily Dickinson probably became a late-life romance, although as their letters were destroyed. Emily found a kindred soul in Lord, especially in terms of shared literary interests. She referred to him as “My lovely Salem” and they wrote to each other religiously every Sunday. She looked forward to this day greatly; a surviving fragment of a letter written by her states that “Tuesday is a deeply depressed Day”.

After being critically ill for several years, Judge Lord died in March 1884.Emily referred to him as “our latest Lost”. Two years before this, on April 1, 1882, Dickinson’s “Shepherd from ‘Little Girl’hood”, Charles Wadsworth, also had died after a long illness.

As death succeeded death, Emily found her world upended. During 1884, her health issues were increasing, she fainted while baking in the kitchen, she remained unconscious during long hours and weeks of ill-health followed. She was confined to her bed for a few months, but managed to send a few letters in the Spring. It is supposed that her last letter was sent to her cousins, only these words: “Little Cousins, Called Back. Emily”.

“Saying nothing sometimes says the most.”

If you happen to visit Amherst, Massachusetts, I would recommend the visit of The Emily Dickinson Museum, which will enable you to learn more about Emily Dickinson’s life, work, time, family and influences on her writing…

© DROPS OF EVERYTHING - 2020 All Rights Reserved No part of this website or any of its contents may be reproduced, copied, modified or adapted, without the prior written consent of the author.

Mindful exploring, through the eyes of a viking daughter.

looking through the lens

Goodies from my mailbox and camera

Kath's Blog......diary of the everyday life of a crafter

News and Notes from the Happy Shack

News from my neck of the woods